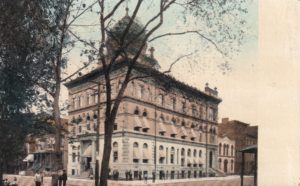 To see images from the Library’s past, and Hoboken’s as well,
please view this collection of archival photos and material.

September 5th, 1888: Meeting of City Council at which Edward Stanton made a resolution calling for a charter election for a Library.

April 9, 1889: Citizens overwhelmingly approve Library Charter during the November Election and is funding by a tax of one-third of a mill on each dollar of assessed value. Board appointed by Mayor August Grassman.

October 15, 1889: Certificate of Incorporation accepted at Board meeting.

October 2, 1890: Library opened in the basement of the Second National Bank Building with 3500 volumes on the shelves. (A future survey will determine how many of those volumes are still a part of the collection.) The cost of the books at that time was $3,247.76. The quarters in the Second National Bank basement soon proved inadequate. Through a competitive process, architectural plans were submitted and reviewed. The firm awarded the contract was Albert Beyer. Other competing firms were George M. Pollard and Mowbray & Uffinger.

November 26, 1895: Final plans and specs for new building accepted and adopted. A notice to builders was printed in The Observer.

December 23, 1895: Sealed bids were accepted, addressed to the Board of Trustees at the Office of the Librarian. The plans were open to inspection at the Librarian’s Office or at Architect Beyer’s Office at the 2nd National Bank Building.

January 1896: Mrs. Martha B. Stevens delivered to James Minturn, Corporate Attorney for the City, the deed conveying the site.

April 14th, 1896: Cornerstone was laid. It was to include all printed forms, paper, and documents used in the library.

June 30th, 1896: A. Beyer notifies the Trustees that the Manufacturer of Plastic Roofing retired. Beyer requested that the style of roof be changed from the original plan. (This explains the tar paper roof which presently adorns the building.)

20 September 1912: The Edward Russ Law Library opened on the Library’s second floor.  It was one of the largest collections of law books in the state at the time.  A ten inch shell from the battle 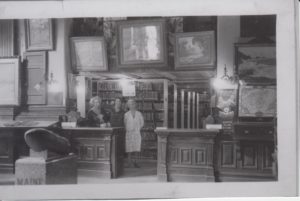 1926: Children’s Story Time was first introduced by Nina Hatfield, who had become the first female director a year earlier.  At times more than 75 children between the ages of 3 and 10 would gather for her stories.

2 October 1940: The library celebrated its 50th Anniversary.  At that time it had 125,074 volumes.  In honor of the anniversary Nina Hatfield arranged an exhibition of catalogs and newspaper clippings about the opening a half century before.

1977: Former Mayor Steve Capiello donated an original portrait of Sinatra and his mother Dolly.  The portrait is still proudly displayed in the second floor.  A few years later the Frank Sinatra Memorabilia Collection was created by then Acting Director Terry Sasso.

13 March 2007: the library opened a new elevator and newly renovated restrooms on the first floor.

2012: The Library’s basement suffers severe damage as a result of Superstorm Sandy.  Efforts start immediately to remediate the damage.

June 8th, 2013: The Hoboken Public Library held its First Book Festival at the Library and in Church Square Park. 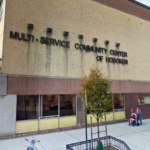 2016: In cooperation with the City of Hoboken, the Library opens a “Pop-Up Library” on the second floor of the city’s Multi-Service Center at 124 Grand Street.  In 2019, the facility becomes unofficially known as The Grand Street Branch.

2019: In cooperation with the Hoboken Housing Authority, the Library opens The Learning Center at HHA, a facility to serve the local community. 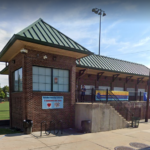 For more library history see our illustrated timeline display on the second floor of the Main Branch (500 Park Ave).